Our show features a comprehensive lineup of seminars and demonstrations! Use the buttons below to find what interests you! 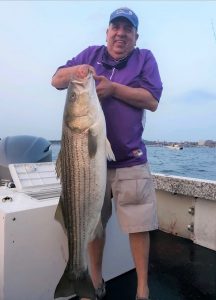 The Evolution of Al Gag’s Lures

Al Gag … Al “Gag” Gagliarducci, of Al Gag’s Fishing Lures, is known and well respected throughout the East Coast as the inventor of the now famous Whip-it Fish and Whip-It Eels soft plastic lure. Al has a long history in the fishing industry. He has been building and designing custom lures since 1978.

His passion for making better lures stems from his love of fishing and the knowledge that there is always a little room for improvement. Drawing from his many years of experience out on the water, Al knew he could design a better product that would not only meet his needs, but the needs of avid fishermen and women throughout the county and now the World! Today, Al has a full line of custom lures and you can find Al speaking at fishing shows up and down the East Coast.

Gag’s most now famous lures are called the ‘Whip-It Eel” “Whip-it Fish” and his NEW 5oz World Record Striper Company RATTLE head and the 1/2oz Underspin! This special lures have  a custom molded head, life like eyes and, a shape that adds a natural swimming action that fish love. 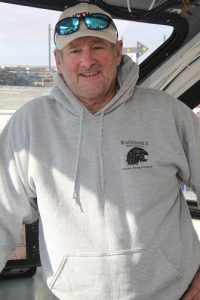 Capt. Greg Dubrule, of Blackhawk Sport Fishing, has been a popular figure in the New England charter and partyboat industries for over four decades. He possesses an extensive knowledge of both inshore and offshore fishing, from 1,000 lb blue marlin and giant tuna to striped bass and blackfish. He’s been a featured seminar speaker at all the major sport and fishing shows throughout the lower 48 states.

Greg has been written up in national publications such as Outdoor Life, Saltwater Sportsman, Field and Stream, and countless other regional and national publications- even Newsweek magazine. Dozens of television shows have featured him over the years, including Al Linderfrom The In-Fisherman series.

He’s a colorful and excitable seminar speaker willing to share his experiences and expertise to instruct anyone on how to catch’em.  Greg is currently the owner and operator of the partyboat BlackHawkout of Niantic, CT where he puts a tremendous amount of energy and enthusiasm into the BlackHawk’s own Take A Kid Fishing and Black Hawk and the Community. 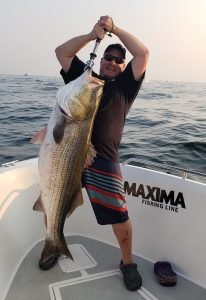 Captain Joe Diorio is a well-known for fishing throughout the New England community. He has been fishing the coastal waters of CT, RI and NY for over 25 years. He is the owner and operator of Joe Diorio Guide Service, which runs out of CT on his 22’ Bluefin.

Joe is best known for catching trophy sized Stripers in the New England area throughout the year, but also has an extensive knowledge targeting various other species in the area. Joe is a 3 time On The Water Magazine, “Angler of the Year” and has won and placed numerous tournaments. He has landed many Stripers over 50 pounds, one 60+ pounder, and this past season Joe caught and released a massive Striper over 70+ pounds. This past season alone Joe and his clients have boated over 10 plus Stripers at an astonishing 50 plus pounds. Each of those Stripers were released to assure the protection and future of Striped Bass. Recently Joe did a TV show with On The Water Magazine that will be aired in February 2019.

He is affiliated with some of the very best companies in the industry which allows him and his clients to fish with some top of the line products the fishing world has to offer. Joe’s seminar is one that you will not want to miss. 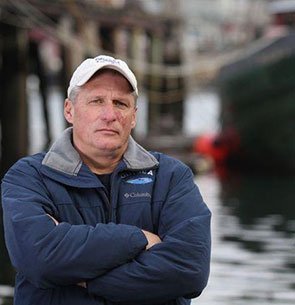 Captain Ralph and the Odysea are featured in the National Geographic channel’s Wicked Tuna. Along with other skilled fisherman, Captain Ralph and First Mate Kit Pirate Vallee set out in the fierce waters of the North Atlantic in the hopes of catching the elusive and valuable Bluefin Tuna. These men rely on fishing for their livelihood, and with the potential for a high price tag for one fish the competition can, and often is, brutal. 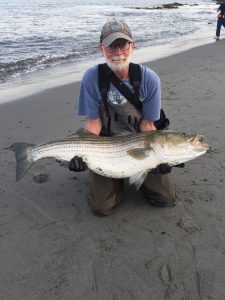 The presentation will cover tactics used by the myself and others for targeting larger striped bass in the era where large striped bass are increasingly rare in the surf. 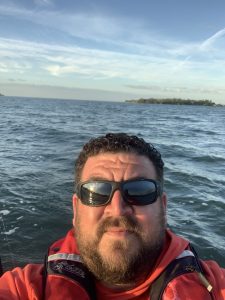 Gregg Kobrin manages New England Dive in Wallingford, CT.  New England Dive rooted as a mom and pop scuba shop, but has expanded into a 10K sq ft retail store to include more watersports like fishing, sups and kayaks too. Gregg has seen it all when it comes to the underwater world and would like to share some of his experiences with the fishing and outdoor show.  Come hear about diving and freediving and how we can hunt by spearfishing in either facet right in our own backyard. 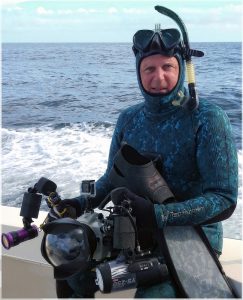 Laptew’s all new video presentation will reveal the underwater world of New England’s greatest salt water game fish, the striped bass. You will learn what they eat, when they feed, where the largest fish lurk, and how to entice the bite. Awesome underwater footage will show stripers feeding, expose false albacore attacking their prey, and disclose the most important fish-holding territory for monster fluke. If you’re after black sea bass and tautog, you’ll see their favorite habitats and learn how to score more from the shore, boat, or kayak.

Laptew has been diving for over 50 years and he has been capturing fish on film from Maine to New Jersey, and from Siberia to Costa Rica. His photographs have appeared in many national and regional magazines including Field and Stream, Gray’s Sporting Journal, Anglers Journal, The Fisherman, On The Water,and Sport Fishing. Laptew’s video footage has appeared on many popular TV shows and documentaries. Mike’s “Focus on Fish” seminar will change your approach to fishing whether you’re a seasoned angler, or new to the sport. It’s a show the whole family will enjoy. 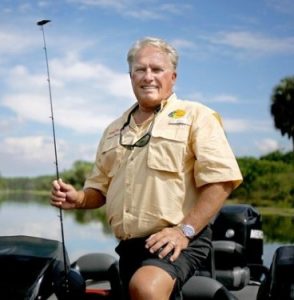 Roland Martin is a professional sport fisherman and the most accomplished tournament angler of all time. Martin is host of Fishing with Roland Martin on the NBCsports television channel.
Fishing over 300 national tournaments, Martin’s BASSMASTER career includes the following achievements – 19 tournaments won, 9 B.A.S.S. Angler-of-the-Year titles,[1] nearly 100 Top Ten finishes, and 25 appearances in bass fishing’s world championship event, the Bassmaster Classic. Also a record, he has 19 second place BASS finishes. His career tournament winnings exceeded one million dollars in 2004.
Roland Martin was the first professional bass fisherman to be inducted into all three Halls of Fame (IGFA Hall of Fame, Freshwater Fishing Hall of Fame, Professional Bass Fishing Hall of Fame).
He popularized the concept of “pattern” fishing – determining a particular way to catch fish for a given time and lake, and then applying it to similar locations around that lake. He has been an able and enthusiastic spokesman for bass fishing, conservation, and the pursuit of the American dream for decades, generating a large following of fans.
Sponsorships: Bass Pro Shops, Nitro Boats, Mercury Outboards, Frogg Toggs, Th3 Legends, Megastrike, Yamamoto Custom Baits, Minn Kota, Power Pole. 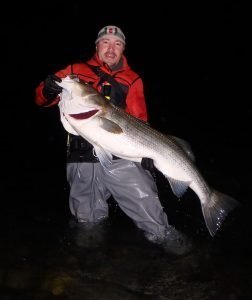 Tapping into his more than 30 years of fishing, Toby Lapinski will discuss the many different ways in which a surfcaster can use eels to catch cow striped bass in the surf. From fishing them live, dead, rigged and skinned, he will tackle the how, when and where to make them work for you!

Animal Adventures is New England’s largest, privately owned animal rescue center of its kind. We have been operating out of Bolton, MA since 1997. We started as an exotic animal rescue center and expanded into a family operated small zoo. Unlike the big zoos, we are not super fancy but do what we must to provide an enriched life for the animals. We take in hundreds of unwanted or unable to be cared for animals each year. Some, we are able to re-home and others will live here for the rest of their lives. We are open to the public for visiting, tours, classes and events. We also travel to do educational programs at schools, libraries, colleges and more. 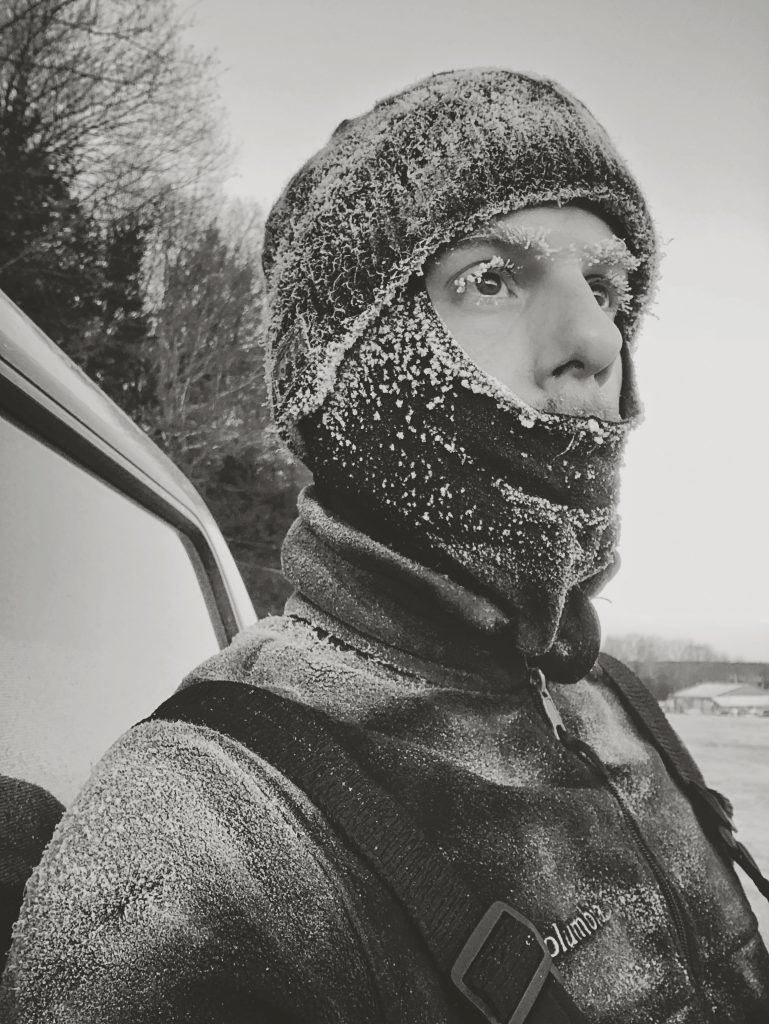 “In a Single Year” Hiking Seminar

Philip J. Carcia is a hiker, runner, and media creator who has logged over 15,000 miles on some of the most iconic trail networks in North America.Growing up in Massachusetts and cutting his teeth in New Hampshire, Carcia fostered a deep love affair with the mountains of the Northeast at an early age. Almost two-decades later, that love continues to widen, and has become an anchor in Carcia’s personal and professional narrative.

Between August 23rd 2018 and July 7th 2019, Philip J.Carcia climbed all 48 4,000 footers in the White Mountains of New Hampshire in every month, for 12consecutive months, establishing the Fastest Known Time for one of the most grueling and obscure peak-bagging projects in the United States – the Single Year Grid. “In a Single Year” is the unparalleled retelling of Carcia’s experience in the White Mountains. Featuring his own images and high-definition video, Carcia navigates themes of personal loss, reclamation and “giving fully” to help narrate what can only be described as a once-in-a-lifetime New England adventure.

All of our 247 Lures are hand-painted and hand-made right here in central Connecticut. Sealed, painted, clear-coated, rigged, and built in our very own workshop. We take great care to ensure each and every lure is of the utmost quality. We would never send you a product that we wouldn’t fish ourselves! 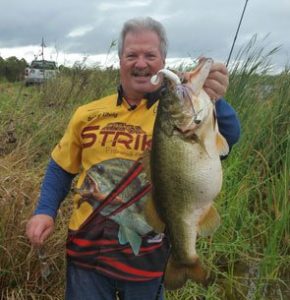 Professional Bass Angler and Master Lure Designer, Bobby Uhrig will teach you what to look for and how to dissect different areas of the lake to optimize your fishing time. We will teach you how to eliminate unproductive water. Let us demonstrate the lures and techniques used to catch more fish than ever before. These are seminars you will not want to miss! 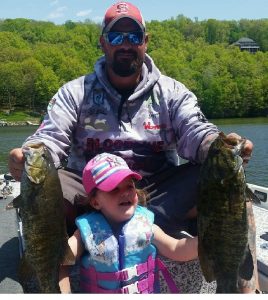 T.J. DeFelice is the owner and operator of Candlewood Lake Guide Service and Bounty Hunters Custom Baits. After serving as a United States Marine Scout Sniper and with United States Special Operations Command for over twenty years T.J. returned to his home state of Connecticut and the water where he grew up fishing in order to pursue his passion with introducing others to the outdoors and passing on his experiences on the water to others while guiding.

While serving in the Military T.J. was afforded the opportunity to fish some of the world’s best oceans, rivers and lakes. Spending a great deal of time on the water in Southern California and in the Carolinas provided T.J. with the ability to learn and in many ways master fishing techniques that have proven successful nationwide.  T.J. has a passion for producing 100% custom hand poured, hand tied and hand painted baits to facilitate these techniques from doodling and drop shotting to fishing finesse jigs and the float and fly.

In 2019 T.J. expanded the fishing business and partnered with North East Fishing Adventures. Under North East Fishing Adventures a new line of custom baits will be released at the show in March 2019 including the Float and Fly Evolution. The Float and Fly Technique has accounted for many tournament wins and outstanding guide trips on Connecticut waters over the last three years for T.J. and His Brothers. In 2019, Candlewood Lake Guide Service will be providing additional guide services focusing on providing tournament anglers on the water experience with this technique.

Shane travels all across the country to conduct seminars atop The Hawg Trough, a 5,000 gallon fully stocked fishing tank. He’ll be teaching his best tips and techniques at free seminars throughout the weekend.